“Every line on her on her face is a place and a memory...”Older Than Me 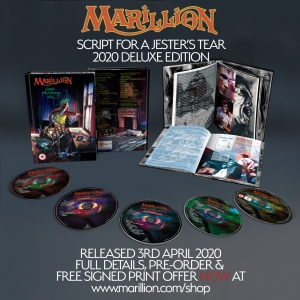 We'd just like to say thanks to everyone who has purchased one of our "Friends" tour signed prints.

The response has been amazing!

Thanks to your generosity, we have already been able to make a substantial donation to Hope Flowers.

You can find out more about the work they do at www.hopeflowers.org

We still have limited stock of some prints available, we will not be reprinting these so when they're gone, they're gone -

In other news we are pleased to announce the launch of the latest release in the Warner Music Deluxe Editions of the 8 EMI Marillion albums.

Script For A Jester's Tear is being released as a 4CD / 1 Blu-Ray set and a four-LP box.

Both collections feature a new stereo mix of the album by Andy Bradfield and Avril Mackintosh.

They also include a stereo remix of the Market Square Heroes EP (and the track "Charting The Single") and a previously unreleased show from the Marquee Club in London on 29th December 1982.

The blu-ray contains 96k/24-bit audio of Script and the Market Square Heroes EP and the Marquee show. It also includes a 5.1 surround mix of Script by Andy Bradfield & Avril Mackintosh.

Finally, it also features "Sackcloth & Greasepaint" - a new in-depth 90 minute documentary covering the formation of the band through to the release of Script in 1983, and including interviews with Fish,
Mark Kelly, Diz Minnit, Mick Pointer, Steve Rothery, Pete Trewavas and Mark Wilkinson.

The first 4000 orders across all formats will receive an A4 print of the album artwork (while stocks last) hand signed by Mark Kelly, Steve Rothery, Pete Trewavas and Mick Pointer.